I've received what appears to be the WHO's draft text about e-cigarette regulation (from this week's top secret FCTC meeting in Moscow). 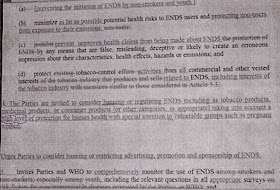 Apologies for the poor quality of the image. You can click to enlarge, but this is what it says (all strikes and underlines are in the original. ENDs are 'Electronic Nicotine Delivery Systems', a daft term that only 'public health' people use for e-cigarettes):

(a) [preventing the initiation of ENDS by non-smokers and youth]

(b) minimize as far as possible potential health risks to ENDS users and protecting non-users from exposure to their emissions; non-users

(c) prohibit prevent unproven health claims from being made about ENDS the promotion of ENDS by any means that are false, misleading, deceptive or likely to create an erroneous impression about their characteristics, health effects, hazards or emissions; and

3. The Parties are invited to consider banning or regulating ENDS including as tobacco products, medicinal products or consumer products [or other categories as appropriate] taking into account a high level of protection for human health with special attention to vulnerable groups such as pregnant women.

Urges Parties to consider banning or restricting advertising, promotion and sponsorship of ENDs.

5. Invites Parties and WHO to comprehensively monitor the use of ENDS among smokers and non-smokers especially among youth including the relevant questions in all appropriate surveys on risk factors for non-communicable diseases...


The various deletions suggest that this may not be the finished article. Nevertheless, assuming that it is genuine and current, it is important to note that the WHO's position is to urge countries to ban the marketing of e-cigarettes. It would also like them to ban them entirely or regulate them as tobacco or medicinal products (which, of course, they are not).

Moreover, the WHO is also considering rolling out Article 5.3 to e-cigarette companies. Article 5.3 says that tobacco companies shouldn't be involved in setting public health policy. Anti-smoking cranks like to pretend that (a) it is a law (it isn't in most, if not all, countries), and (b) that it stops governments having any meetings with the tobacco industry or anyone who is vaguely connected to the tobacco industry. Some politicians have fallen for this lie. Extending Article 5.3 to e-cigarette companies would be a very bad idea as governments urgently need to hear from people who know what they're talking about with this emerging technology.

Finally, you will note the reference to 'protecting non-users from exposure' to e-cigarette vapour. This assumes that there is something in the vapour that non-users need to be protecting from, but there is no credible evidence for this. Clearly, the aim here is to encourage bans on e-cigarette use indoors (and, if pocket dictators like Lord Darzi have their way, outdoors too).

I stress again that the above may not be the final text, but if it bears any resemblance to the finished draft, it looks like the WHO will be recommending advertising bans, inappropriate regulation (up to and including prohibition), indoor bans on use and the exclusion of e-cigarette companies from the dialogue. Not quite the light touch we were led to believe would be the outcome of COP6.
Christopher Snowdon at 2:13 pm
Share