Calorie consumption revisited (part 1 of many)

● There is a long term downward trend in energy intake since the early sixties (visible in all components of the chart). Combining year on year changes of estimates on like bases suggests that average energy intake per person is 31% lower in 2012 than in 1974.

● Despite decreasing energy intake, over-consumption of energy relative to our needs is a major factor in increasing levels of obesity


Taking the long view, DEFRA provides this graph. It goes back to 1940 and shows three (or, arguably, four) different datasets. 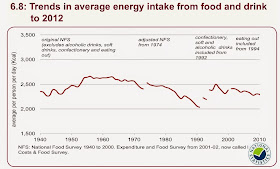 Initially, from 1940, the figures show per capita calorie consumption but exclude calories from alcohol, soft drinks, confectionery and food eaten outside the home. After rising after the war, the trend is downwards after the 1950s.

In 1992, calories from confectionery, soft drinks and alcohol were included, and, in 1994, calories consumed outside the home were also included. The addition of extra items naturally pushed the line higher up the graph, but in each case the trend continued downwards.

In 1948, 2,387 calories per capita were recorded, but this excludes alcohol, confectionery, soft drinks and eating out.

However, by 2012, despite all of the above now being included in the figures, recorded consumption was 2,209 calories per capita, which is to say it was lower than the 1948 figure.

Obesity prevalence is clearly much higher today than it was in 1948 and it seems clear to me—and should be clear to anybody who has the slightest understanding of the difference in the typical lifestyle of 1948 compared with today—that the primary reason for this is a big decline in physical activity, whether it be in the workplace, in the home or in personal transportation. 'Energy in' has gone down, but 'energy out' has gone down even more.

However, as we have seen previously, the nuclear option for who insist that obesity has risen because people are consuming more and more calories is to dismiss the DEFRA data—and all other data that show the same trend—out of hand on the basis that it is self-reported and therefore unreliable.

Aside from the fact that this is simply not true (there is plenty of evidence on household shopping that shows the same decline in calorie consumption), the 'we're eating more' claim is asserted without evidence and can be dismissed without evidence. Merely stating that people under-report what they eat, although true, is not enough to turn the graph upside down under any plausible scenario.

I have picked 1948 as a reference point here because it falls in a period covered by a British Medical Journal study that I briefly mentioned in The Fat Lie. Published in 1953, the study looked at calorie intake and weight changes amongst the British population during the years of rationing. It shows not only how much people were eating, but how much they needed to eat.


The authors concluded that the government of the day's advice that an average British adult should consume 2,800 calories a day was 'probably too low'. They suggested that 2,900 calories a day was closer to what was needed to maintain a healthy weight. This was based on empirical data that showed that people tended to lose weight if they consumed less than that.

By contrast, today the government advises the average Briton to consume 2,250 calories a day to maintain a healthy weight. A diet that would be considered as the bare minimum, or even below the minimum, in the 1940s would be enough to make most modern Britons gain weight.

The very fact that government advice on calorie intake has changed so much over the years is, in itself, a stark recognition that we do not need to eat as many calories as we did decades ago. Why? Because we are considerably less physically active than we were decades ago, not only in the workplace, but also in the home.

Moreover, we do—on average—eat fewer calories than we did decades ago, or even a few years ago. You can argue that we are still eating too much (many people obviously are), but to pretend that we are as physically active as ever whilst eating more than ever is a complete inversion of the truth.
Christopher Snowdon at 7:15 pm
Share