The jewel in the crown?

The first decade of NHS stop-smoking services in England has been hailed a success by researchers.


I knew the NHS was in bad shape but I didn't think that things were so dire that being able to help a mere 14,600 people give up smoking each year was enough to become "the jewel in the crown" at the world's third biggest employer. There are about 10 million smokers in England. That means the service helped less than 0.15 per cent of them to quit, and some of them would have quit anyway. Trebles all round!

How much does this thing cost?


£84 million a year?! That's nearly £5,753 per quitter. We could buy 200 e-cigarette starter kits for that. It would be a hell of a lot more effective than dishing out nicotine replacement therapy and telling people to take one day at a time.

But who are these impartial researchers that have painstakingly assessed whether the service provides value for money?

Prof Robert West, who led the team, said stop-smoking services could be considered the "jewel in the NHS crown".

Well he would, wouldn't he, considering his conflict of interest...

Robert West undertakes research and consultancy for companies that develop and manufacture smoking cessation medications. He has a share of a patent for a novel nicotine delivery device. He is a trustee of QUIT.

"It has been a real success. These services are important because the people who are using them are the heaviest smokers who are the least likely to give up.


Actually, the people who contact smoking cessation services are more likely to give up than average. It's the ones who don't have any desire to give up and never seek assistance who are the least likely to do so.

Despite the headline saying that this service is "a success", the outcomes are so obviously feeble that the BBC's number one public health brown-noser, Nick Triggle, has written one of his little editorials to paint it in a more positive light.

It is easy to look at the study produced on the performance of the NHS stop smoking service in its first decade of existence and conclude money has been wasted.

Indeed it is. The best part of a billion pounds, in fact.

The unofficial target for the service is to get half of the people who turn to it for help to quit in the short-term - that is to say to give up for at least four weeks.


Never mind. Let's throw some more money at it, eh?

In fact, the data published on the British Medical Journal website shows if anything performance deteriorated slightly.


Great. Close it down and spend the money more effectively on something else.

But that would do the service an injustice.

In terms of providing value for money, stop smoking is among one of the most "cost-effective" treatments adopted by the NHS in the past decade, according to...


Go on. According to whom? Which economist have you contacted? Which disinterested third party has been on the phone?

...Martin Dockrell, of the Action on Smoking and Health campaign group.

According to the figures for the year up to March 2011, the service made contact with about 8% of the nation's smokers.


And only 0.15% of the nation's smokers gave up as a result, so that makes a 98.1 per cent failure amongst people who actively bothered to get in touch. That's even worse than the standard unassisted quit rate.

Of course, only a minority end up quitting in the long term.


You can say that again.

Since the mid 1990s the numbers of smokers have been hovering stubbornly above the 20% mark.


That's not quite true, is it? The smoking rate was falling quite nicely from the mid-1990s until 2007 when it reached 21 per cent. Then we had the smoking ban, graphic warnings, a ban on sales from vending machines, anti-smoking adverts with hooks in people's faces and a series of large tax hikes. The result is that the smoking rate fell by a mere one percentage point in four years, whereas before anti-tobacco extremism took hold it was falling at a rate of one percentage point per year. So it's now 20 per cent. Great success! 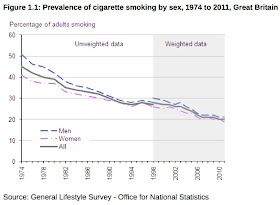 Trick Niggle says all of this in the most delicate terms...

In recent years the numbers have come down by less than 1% a year.

That is, I suppose, a technically true way of describing the pathetic failure of tobacco control in recent years.

Some of that is down to smokers dying and the success of health campaigns in discouraging a new generation of smokers from taking up the habit.

But some of it is undoubtedly linked to the success of the NHS stop smoking service - and that is why experts are hailing it as the "jewel in the NHS crown".

Pass the sick bag.
Christopher Snowdon at 2:57 am
Share